SXSW 2018 Panel Recap: Smart Contracts – Are we getting rid of lawyers? Last week at @sxsw 2018 in Austin, I had an opportunity to explore the concept of ‘Smart Contracts’ with a great panel of experts. The session was well attended, and generated lots of great questions. This is a review of what we discussed in case you missed it.

The panel conversation was framed as follows 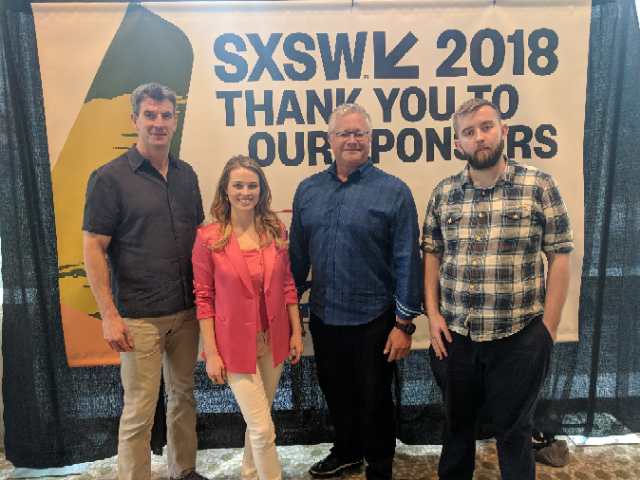 I moderated the panel, motivated from my background as founder at DocuSign, building the first cloud based electronic signature/workflow platform, and currently investing in early stage technology companies with a focus on blockchain and identity. The other panelists included:

Our first discussion was simple, define the term ‘smart contract’. Unfortunately, we did not arrive at just one definition. It turns out there are several different perspectives on the panel. We all agreed that a smart contracts definition included the notion of automation, and self-execution of the terms of the agreement. But then the definitions started to diverge.

Sergey’s definition focused on the notion of a ‘tamper proof’ digital agreement, with the attribute of ‘tamper proof’ being enabled by execution on decentralized infrastructure. His point being that if it is not decentralized, it may be controlled by a single party. Essentially his point is that a smart contract must be on a decentralized blockchain where nobody can assert control. This is important he pointed out where there is a lack of trust between the parties, such as insurance claims.

Ken quoted some existing state definitions defining smart contracts as “event driven program with state that can instruct the transfer of assets”. In Ken’s definition, there was no requirement to execute on a distributed blockchain.’ In fact, any computer program that executes on behalf of others, can be considered a smart contract. This would include a vending machine, or an online stock trading system.

In fact, Ken pointed out the term ‘smart contracts’ is really not accurate. According to Ken, “a smart contract is a mechanism for fulfilling one or more provisions of that agreement. A smart contract doesn’t care about the nuances of the law; it just carries out the instructions it is given.”

My own point of view is a hybrid of these two views. A smart contract refers to the ‘execution engine’ of a previously defined agreement, and it must provide the proper level of assurance that it cannot be tampered with, so it is reliable. However, this may be delivered on a ‘trusted’ network that is tamper proof, but that does not require a blockchain. There are other mechanisms that can provide tamper proofing.

As an aside, it seems natural to me that a combination of DocuSign’s platform for creating and managing legal agreements could drive a series of smart contract elements that may execute on a distributed block chain to deliver the automated execution portion. However, there may be other viable ‘non-chain’ technologies that could deliver this value as well.

Getting rid of lawyers?

The key topic was that of getting rid of lawyers. Ken pointed out that lawyers play a few roles, that of creating agreements, and that of managing things when there is a dispute. Creating agreements may require lawyers to learn how to code, or to be able to read pseudocode from a contract platform, but that managing disputes over agreements will never go away. More work for lawyers.

One area of change is that smart contracts based on open source platforms will very likely be copied over and over. This ‘copy paste’ process is similar to what happens today with standard contracts, but much more is being copied. Copying a smart contract likely copies the logic, and the data source connections the contract uses to execute. Conceptually, this removes the need for legal assistance in creating these agreements. Less work for lawyers.

A recent report indicated that over 34,000 smart contracts on the Ethereum blockchain today are either poorly created, or malicious putting millions of dollars at risk. Who is to blame when these break? Again, more work for lawyers.

So your JD seems safe for now, but you might want to polish your Solidity and Python skills!

Oracles – more than an API

Sergey discussed the need for smart contracts to have access to ‘data feeds’ in order to execute their logic. As an example, if a smart contract is supposed to pay someone $500 when a building permit is filed, the smart contract needs to be able to tap into some data source that informs it of this.

If the data source is a simple API from a single source, it may be at risk of being compromised or being inaccurate. If the result is payments automatically being paid in error, this could be very bad. This is where the notion of an ‘oracle’ comes into play.

An Oracle is designed to be more than ‘just an API’. They will include a rating so that its accuracy and usage could be seen, and may in fact collect data from more than just one API so that the data can be more highly trusted. Need a maximum amount of trust? Use multiple oracles. The ‘Chainlink’ technology is being built to deliver this. So, if you want to rely on some data feed to make your payments, you will choose an Oracle over an API every time. Especially for automated contracts.

Do we need new laws?

Given this all this new technology, automation, and oracles, do we need more laws? Perianne and Ken’s response was a resounding ‘No!’. It turns out that the existing frameworks we built over the past 20 years including the Federal ESIGN act, and the state UETA frameworks already define ‘digital agreements’, ‘electronic agent’, and generally indicate that if a contract is required an electronic contract will suffice.

The Digital Chamber of Commerce position is this: “Existing legal frameworks for defining and giving legal effect to contracts cover smart contract technology, and nothing regarding smart contracts ought to change existing definitions or the application of current contract law. Additional laws are largely unnecessary and will only serve to confuse the application of current law.” Perianne has met with many different states and federal departments to ensure this message is heard. Her mission is to create a regulatory environment where smart contract technology can flourish.

Despite this effort, some states are still trying to be helpful by passing new laws. These may in fact backfire, and create a patchwork of differing opinions which could actually stall this new technology. The punchline? We don’t need new laws!.

Smart Contracts are a big deal!

One area of agreement across the whole panel was that smart, self-executing, reliable agreements will provide dramatic improvement over today’s manually managed contracting process, and that this technology will have a massive positive impact on businesses of all types and sizes.

This likely begins in markets where trust is lower such as some governments, insurance, and property recordation. However, the business benefits of streamlining transactions and lowering costs means smart contracts will find there way into every type of agreement.

It also means that traditional ‘contract management software’ that stores agreements in a database disconnected from the world, and requiring manual follow-up and review is obsolete. They will be unusable in their current form, and must be re-invented to support dynamic program code linked to the identities, oracles, and payment mechanisms that they manage. This is a massive disruption in a very large enterprise software category.

Due to all this change, we will see some great innovation with smart contracts technology over the next several years as contracting platforms connect with blockchains, payments, and oracles, and new software categories are defined. This is exciting from an investment perspective as we seek those truly breakout companies who will deliver value on scale and in a way that can be easily deployed and consumed.

Many thanks to my panelists, and the great questions from the audience!